The Kübler-Ross model talks about the five stages that a person goes through during a traumatic time – denial, anger, bargaining, depression, and acceptance. While no one in their right mind would compare what’s going on with the recent YouTube changes to anything remotely similar or close to what the model is based around – death and dying – it’s a model that has been co-opted by the masses (myself included) to talk about our feelings around a great many losses of a much less significant, but still personally important measure.

I think there are a lot of small YouTubers who are going through these stages right now. The first, denial, may have been the briefest stage. No way, people said. They won’t treat their creators so poorly. But it’s tough to deny when an official release clearly outlines the new changes.

The second, anger, has been more prolonged. People are upset, for a variety of reasons. Some are mad that these changes have been sprung on them with little to no consultation. Some are upset that the company seems to be placing the blame for recent problems squarely on the shoulders of the smallest of their community members. Others are angry at the loss of an additional stream of income, or the benefits that the Partner Program provided for their channels. And some are mad for their own reasons.

Next up, bargaining – and boy howdy, has there been bargaining. From petitions asking YouTube to cancel the changes, to channels resorting to “sub for sub”, and everything in between. Hashtags have been born to bring together the small channel creators, in the hopes of bolstering each others’ numbers, or presenting a more unified front.

Depression is a bit of a trigger word for some, but what I’ve seen more of from small channels is a depressing effect of this change on their motivation to keep going. Now, that’s not for me to say that some people haven’t felt real depression from this change, because I’m not inside their heads. All I am talking about is what I’ve seen online, from channels who have all but thrown in the towel, saying that they feel less inclined to continue with their videos.

Where I’m coming to now is acceptance. YouTube is now, has always been, and will always be a large company, whose primary focus is making money. The beautiful byproduct of that is that we have a platform by which to share our content with others. While we can dislike how they have communicated the changes, or where they moved the goalposts to, the simple matter of fact is that there is no real competition for YouTube, and so if you want to continue to produce videos, they are your best bet for distribution.

The other part of acceptance is accepting that your channel is probably not “just one viral video away from blowing up”. You work hard to produce content that is relevant to you, and hopefully a small but loyal following of subscribers. And with time, and more hard work, those numbers will grow. But the reality is, if you’re small now, you’ll likely never grow to be one of the stars of the platform. Much like every young hockey player dreams of being the next Wayne Gretzky, and yet so few will ever play a single game professionally. And yet, think of all those happy faces on the rink, content to live in the moment and enjoy the game they’re playing.

Acceptance is knowing the game you’re playing, playing as hard as you can, and enjoying every moment as it comes along. YouTube is your game, small creators. Play hard, and have fun.

I’m mostly talking to myself here. Sometimes acceptance doesn’t come all at once. 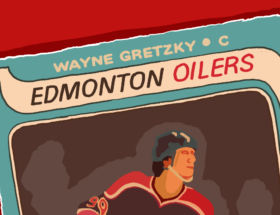