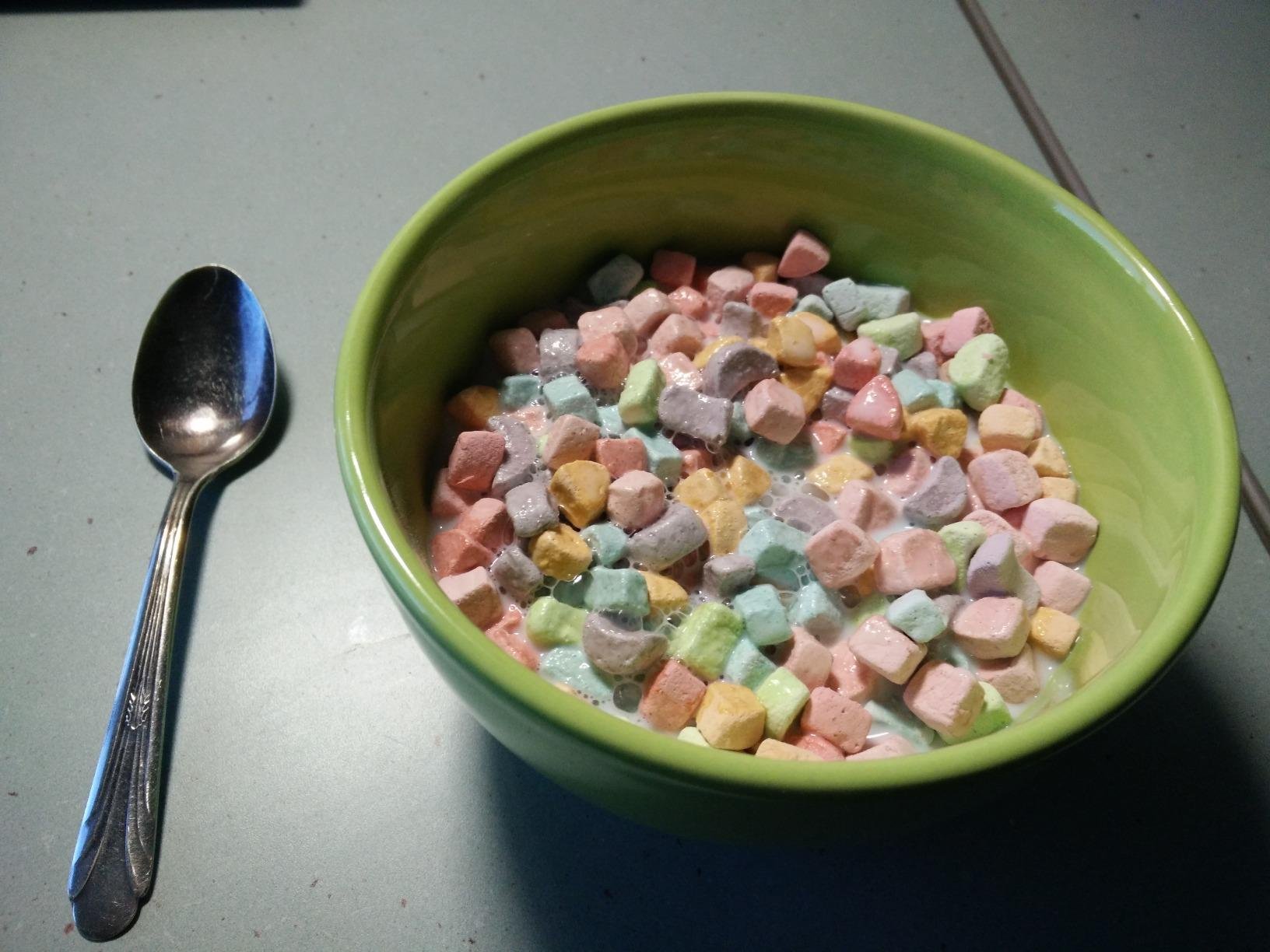 When I was a child, my parents would, on very rare occasion, buy one of those unhealthy, sugary cereals, filled with marshmallows. Lucky Charms, usually. I can count the number of times this happened on one hand. But every time it would happen, I would be filled with this pure, bright happiness. There’s something about little, freeze-dried blobs of colourful sugar in your cereal bowl that just makes you smile.

When I moved out on my own, one of my first grocery purchases was a box of Lucky Charms. I was always very careful when I poured the cereal, lest I use up all the marshmallows at once, and leave a sad box of sugar crumbs and lackluster cereal. I dreamed of picking out every little marshmallow in the box, putting them in a bowl, and eating them all at once.

Today, I lived that dream, and more.

First off, some nutritional information. The bag says that a serving is 30g of marshmallows, which sounds like a lot. There’s a photo of exactly how many marshmallows that is – it halfway fills a small canning jar. Oh, and from that 30g serving, you’ll find 25g of sugar. Just in case you were under the delusion that there little bits were in any way, shape, or form good for you.

There are five shapes and colours of marshmallows included here – purple crescents, pink pyramids, yellow moons, blue blocks and pink… okay, I don’t know what shape that’s supposed to be.

To start with, I decided to roast one. You can see from the pictures, they don’t look so good afterwards. They don’t so much roast as spontaneously combust when exposed to an open flame. They burn with a blue flame, if you’re curious. The resulting burned lump of sugar tasted similar to a campfire roasted marshmallow, but only slightly. It left a small, chewy lump of sugar in my mouth. I would do it again.

Next, I tried mixing a handful of them in to a cup of hot chocolate. Here is where these little beauties shine. They melt like crayons in a hot car, leaving streaks of rainbow sugar swirling across the top of the cup. And, they taste like the little marshmallows you get in the pre-mixed hot chocolate, but they last a little longer before dissolving completely away.

The next morning, I finally lived my dream. I measured out a serving of marshmallows, poured them into a bowl, covered ’em with milk, and called it breakfast. It was everything I thought it would be. Tiny, sweet chunks of melty styrofoam delight that left the milk sweeter than the sugariest cola. I was scoffed at, but those to dare to dream big often are.

For lunch, I made myself some peanut butter toast, and sprinkled some marshmallows over the top. It added a sweet crunch, which was nice, because we always buy the peanut butter that doesn’t have any added sugar or anything.

I wanted to try something interesting with them for dinner, but my wife drew the line at marshmallow-coated chicken breasts. Instead, I made dessert with them. I didn’t actually bother with a real cookie recipe, but just threw a bunch of things in a bowl until it resembled cookie dough, then baked them. This was probably the least successful use for them, as the marshmallows immediately burnt and stuck to the bottom of the pan, while the rest of the cookie remained raw. They taste a little funny, and they look terrible. I can’t put 100% of the blame on the marshmallows here, however. I might try again in the future, but maybe just add two or three to the top of each cookie, instead of mixing a cup and a half of them into the dough itself.

Finally, for a nightcap, I picked out ten little pink marshmallows, and drowned them in vodka. They dissolved terrifyingly fast, but left me with a sweet shot that I’m pretty sure would be popular at a party. So long as no one sees me making them.

I’ve discovered that many people have an aversion to these mini marshmallows, and were disgusted that I was eating them. I feel sorry for these people, for whom something so simple and bright will never be a nostalgic thrill ride of the taste buds.

But if you’re like me, and you want to give a little gift to the child you used to be… don’t think about it, just do it. Make yourself a mini marshmallow smoothie. Put them in your coffee. Mix them with your popcorn at the movies. Or just sit on the floor in your pajamas on a Saturday morning, and eat them by the handful, straight out of the bag.